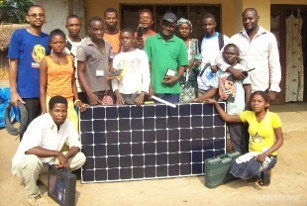 The radio station is expected to provide news and vital information to residents of the Oshwe region, located in the Congo Forest Basin.

"We hope that Congo's government will see how important the solar-powered radio is in connecting with the forest communities," said Greenpeace Africa DRC country manager Loan Tran Thanh.

Radio Television Bondeko, the existing local radio station depends on gasoline-powered generators that stop when fuel deliveries are interrupted, cutting off broadcasts to the local community.

The new solar-powered radio station has been equipped with a powerful tall antenna which allows uninterrupted broadcasting to villages within a 100km radius.

Thanh added, "This would be a perfect example of the renewable energy opportunities that are a solution for communities like this without necessarily destroying the world's second lung after the Amazon forest."

As part of the project, Greenpeace has trained 12 local youth volunteers in maintenance of solar installations.

Station volunteer Poly Boyolo said, "Not only do we know how to install and maintain solar panels, but also have picked up skills that will benefit us and our families."

The solar radio station has been set up after two years of intensive work in the forest area and partnership with Oshwe's population, Greenpeace reported.