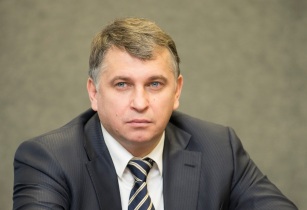 This year, Gazprom Space Systems (GSS) has made an impact on the African and Middle East markets. Among other achievements, GSS was recognised by the world telecom experts of Euroconsult as a “Regional Operator of the Year” at the World Satellite Business Week in Paris in September 2014. Could you elaborate on your strategy and what projects have already been implemented in Africa, in particular?

Our team is working very hard in these markets and, taking into account strong competition in these regions, we are pleased with the results. In such a highly competitive and complex market as Africa, we rely on providers having extensive experience in the region. Our company makes an effort to strongly support and develop the established partnership. We are constantly improving our services, to create a comfortable business environment for our customers and are always willing to share business risks with them. We faithfully and promptly treat even minor requests, and are ready to calculate and re-calculate link budgets to provide the most optimal solution and deliver satellite capacity for testing at any time. Such efforts bring the result! Just a few examples of the projects that we have implemented with our partners.

Telemedia (South Africa) and GSS arranged broadcasting of TV channels for the biggest Angola government television corporation Televisio Publica De Angola (TPA) via the Yamal-402 satellite. TPA came to Yamal-402 because of its high transponder EIRP, which allows to provide Direct-to-Home (DTH) video in all regions of Angola including Cabinda and the Portuguese-speaking Islands of São Tomé and Príncipe. Besides, the extensive coverage makes it possible to receive these TV channels in the embassies of Angola throughout sub-Saharan Africa. 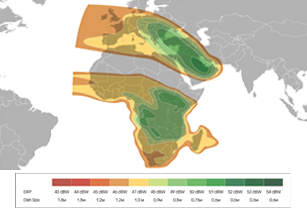 Cooperation between GSS and Telemedia has been developing since the beginning of 2014 when the South African operator, with a nine-metre antenna located in a Johannesburg suburb, uplinked a bouquet of African TV programmes. Among them, sports channels dedicated to horse racing were the most popular. These horseracing channels are interesting not only for bookmakers and betting shops in South Africa but also for the viewers across the entire southern and central African region from Dakar (Senegal) in the west to Mauritius, Reunion and Madagascar in the east. These countries have the target audiences for horse racing services of Phumelela, the owner of these TV channels. Another package of educational TV channels is uplinked by Telemedia in the transponder with the inter-beam connectivity (Southern-European) for reception in Europe, Middle East and North Africa.

We continue our cooperation with a Namibian company SatSpace. It is a well-known provider of reliable and cost-effective Internet service on the continent. SatSpace started using Yamal-402 capacity in October 2013. Since then, the company doubled the utilised capacity. Currently, SatSpace is completing the construction of their own teleport in Angola for providing services via Yamal-402, which will allow us to extend our cooperation in Africa significantly.

Recently, GSS and the company ISAT Africa (a member of Wananchi Group Holding Limited in Kenya and one of the biggest players on the satcom/broadcast market in Africa) announced a contract, according to which ISAT Africa would use Yamal-402 Southern Beam for operation of the network, deployed in DR Congo and other Central African countries.

We also extend business with our European partners. Castor Networks is one of the first customers of GSS for Yamal-402. The company uses capacity for their services in 3 Yamal-402 beams i.e. Northern, European and Southern, as well as cross-strap connectivity between European and Southern beams. Castor Networks has an office in Johannesburg, and opened another representative office in South Sudan recently. This office promotes Internet access services based on Yamal-402 in the region. In South Africa, Castor Networks moved a lot of VSATs to Yamal-402. Besides, a number of big projects for governmental agencies of African countries were implemented with the capacity of the Yamal-402 Southern Beam. The European Beam is used by the company for maritime projects in the Mediterranean Sea and the Middle East. Services for oil and gas enterprises as well as for maritime business are realised in cooperation with ITC Global (USA).

Among our other active business partners, I would like to highlight such companies as OnLime (Germany), BentleyWalker (UK), IABG (Germany), GlobeComm (Netherlands). The list is constantly growing, and we do hope that it will be filled up with new close associates both in Africa and beyond.